EoF life in the territories

EOF LIFE IN THE TERRITORIES

With the slogan of carrying on their shoulders the responsibility of taking the message of The Economy of Francesco to the world, young representatives of the EoF from different countries joined a global meeting to share the projects and activities that they are developing in their territories.

Almost 70 people responded to the invitation of the Global Call on Thursday 11 March, connecting from 24 different countries, representing the life and experiences they are carrying out in places around the globe, as animators of the spirit of EoF, bringing/dropping the global message in their local realities. People who were not able to attend the meeting are very proactive as well, from North America to other States of Africa and Asia, not represented on that occasion. In this new waiting time for an international meeting, also with the Holy Father, young people are called to strengthen their impact in the communities, translating the EoF mission (traced in particular by the macro themes of the 12 villages and under constant inspiration of St. Francis and Pope Francis), in proposals and responses at the local level. They therefore represent a sort of “operational arm” of EoF in the world.

Today, when we speak of a Hub (like those who attended the meeting) we think about “What’s going on locally, what was born from last year meetings and after the November event, particular stories of a territory, perspectives, requests, best practices, projects, work-in-progress initiatives, shared paths and local proposals for today & tomorrow’s new economy”.

“Pope Francis is excited about the work of young people and trusts them” said at the beginning Luigino Bruni, Director of the Scientific Committee of the EoF, who last month received this message from the pontiff. In addition, Bruni underlined his support and that of the central committee for the representatives, emphasizing as well the importance of young people, since in practice they are the protagonists of the process. 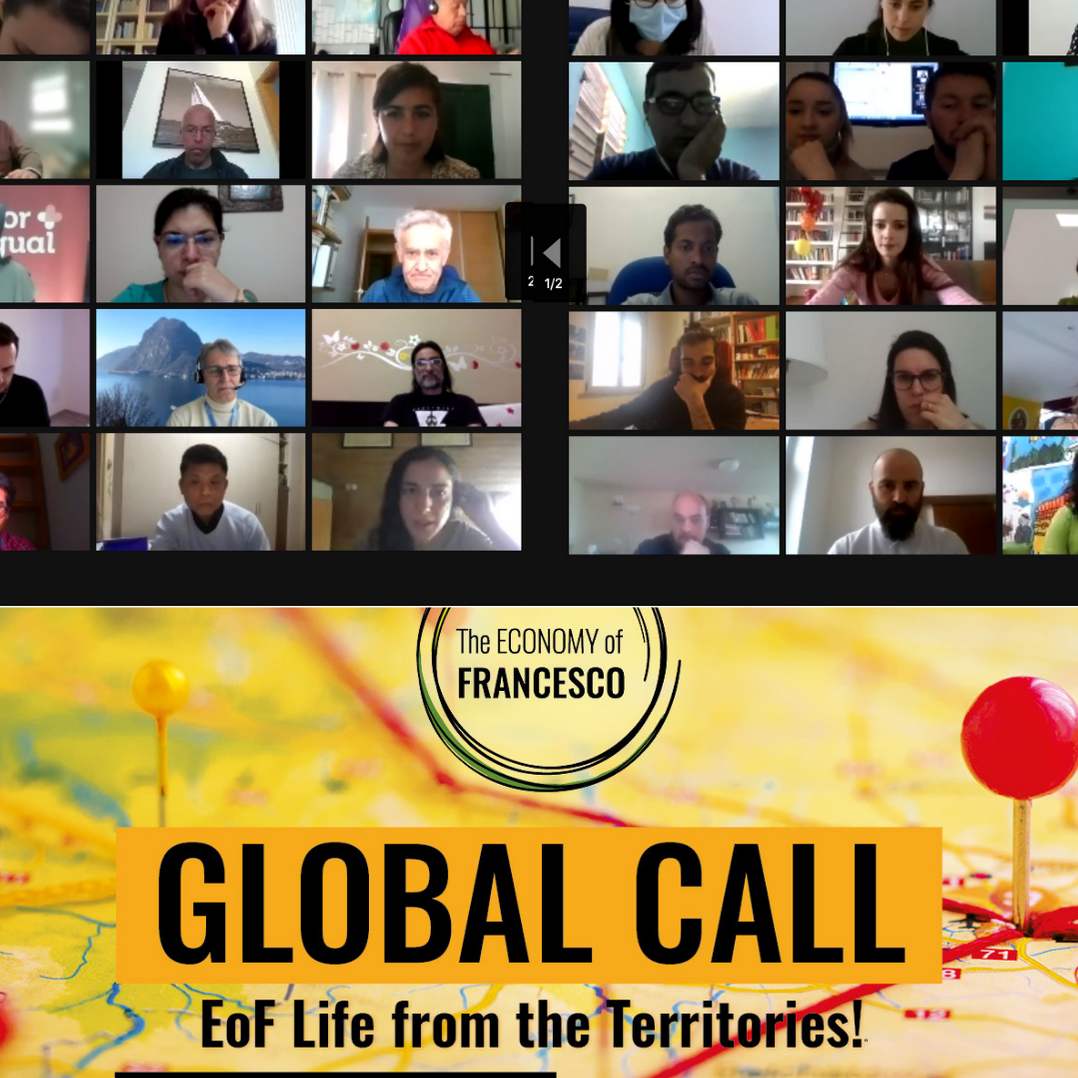 This journey around the world begins in Brazil, where there are different regional, group and individual initiatives, several of them forming part of national structures such as the Brazilian Articulation of Economy of Francesco and Clara, as well as alliances with different academic associations and institutions. Within this country, the ongoing work to establish systemic changes at the national level on the part of the National Association for the Economy of Communion (ANPECOM) also stands out. There are also other local initiatives such as the case of Paraná, where they work for youth and vulnerable women, among others. On the other hand, in Maringa we also work with young people to generate changes in the community based on the vision of the EoF.

The trip continues through Colombia, where the promotion of dialogue, the dissemination of the EoF message and the fostering of leadership on this line are the goals that guide the work of the EoF Colombia, whose work focuses on three lines of action: gathering monthly, alliances with educational and business networks and alliances with the Latin American network of EdF.

Let’s go further north to reach Mexico, where they organize “workshops” aimed at young people from parishes in need, focused on promoting the generation of ideas for impact projects. On the other hand, weekly capsules are organized on useful topics, transmitted by the Facebook channel of Economía de Francisco México

In Peru, for its part, there are awareness projects with young people and teenagers and a link with the Konrad Adenauer Foundation, as well as constant work of dissemination through social networks.

In Argentina, the balance between the local work to land projects, the international and regional ties at the Latin American level is taken care of, without neglecting the moments of encounter to exchange experiences. In Cuba something similar happens with the work done with the Economy of Communion.

Finally, referring to this part of the world, there is the joint project called Latin America EoF Network, where young people from different countries in that region work to spread the EoF message from a Latin American perspective. The upcoming project is the Latin American School of EdF, which aims to bring the concepts learned throughout all this process to practical life. In November of this year there will also be a participation with the Assembly of the Council of the Latin American Episcopate (CELAM).

In Argentina, the balance between the local work to land projects, the international and regional ties at the Latin American level is taken care of, without neglecting the moments of encounter to exchange experiences. In Cuba something similar happens with the work done with the Economy of Communion.

On the other side of the Atlantic Ocean, the Italian Hub will participate in some activities such as the social week of Italian Catholics, a national meeting with various activities will be organized and a Newsletter will be shared with information about events, initiatives and an invitation for young people to collaborate in initiatives such as “The house of Francis” to take advantage of abandoned living spaces.

In Spain, for its part, there are several initiatives with a social perspective that are under the umbrella of EoF, with companies, students and organizations to build a community. Portugal has not been left behind, and they have formed a community and structured a network, which aims to grow and strengthen. Work is also being done on projects in partnership, for example, with the European Network Against Poverty, among others.

In Croatia, it has been built a network that goes “beyond the border”, specifically into Bosnia with the support of the Economy of Communion, entrepreneurs and associations. Among other projects, a festival of Social Doctrine of the Church is organized, a bank of talents is prepared and a “tool kit” for financial education is being made. In Poland, work is being done on a project about the development of a manual of good practices, and another about Catholic Social Teaching together with the Economy of Communion. They also try to understand the global EoF environment and get socially involved.

Our journey continues in Africa. In Cameroon work is being done with universities. For its part, in Angola study meetings are organized and projects aimed at micro-businesses are planned. These, together with other countries of the continent, are building the African network of The Economy of Francesco.

Our path ends in Asia. In the United Arab Emirates, they work hand in hand with the Focolare Movement to support workers in small businesses, who are the majority in that country, and the support of their families and sometimes also friends. In many cases those workers are migrants, and the lack of employment benefits works against them.

It is Sri Lanka’s turn. Despite the various problems that are experienced, such as the lack of water, they work hand in hand with the Church, corporations and Caritas. Finally, the Philippines Hub to support the United Nations Climate Change Conference.

All these and many other initiatives are part of the universe of The Economy of Francesco. Therefore, it is necessary to share life and experiences, because that is what gives content to this great project.