Beyond happiness and eudaimonia…. gratuitousness!

Comments from the EoF meeting with Jeffrey Sachs 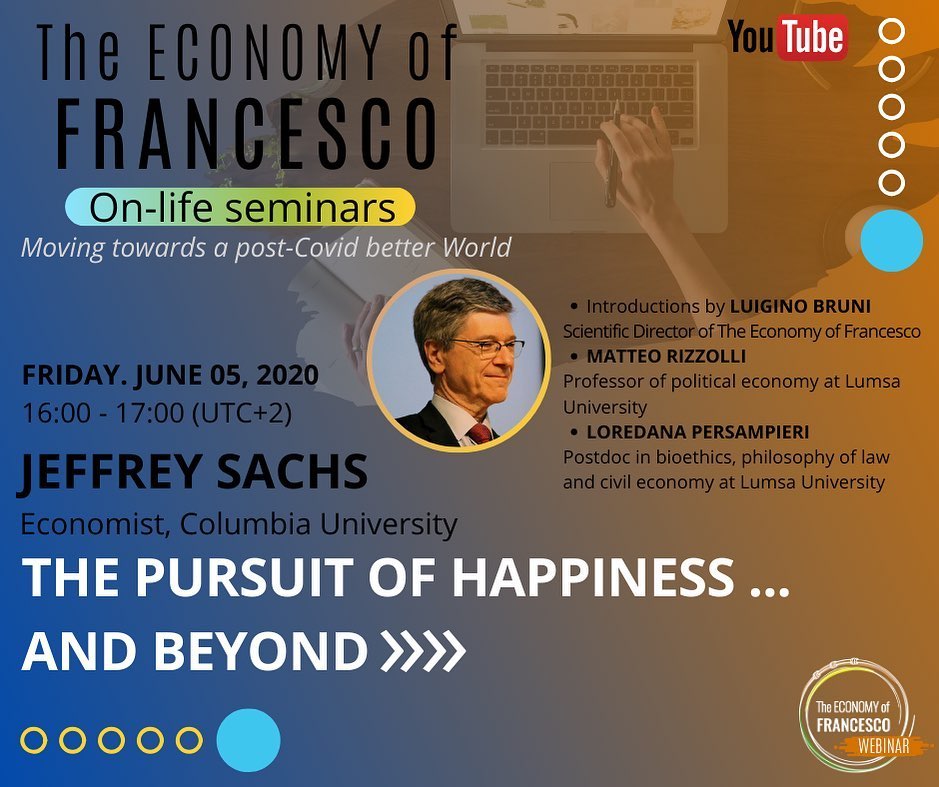 To happiness the same applies as to truth: one does not have it, but is in it. Indeed, happiness is nothing other than being encompassed, an after-image of the original shelter within the mother. But for this reason no-one who is happy can know that he is so. To see happiness, he would have to pass out of it: to be as if already born. He who says he is happy lies, and in invoking happiness sins against it. He alone keeps faith who says: I was happy. The only relation of consciousness to happiness is gratitude: in which lies its incomparable dignity.

On the 5th of June we met Jeffrey Sachs, one of the leading figures of contemporary economics and happiness studies. Having such an important economist on the On-Life webinars organized by the Economy of Francesco (EoF) has been a real joy. Through a technological device masterfully operated by Matteo Rizzolli, the attendees to the event—mostly young EoF participants—were able to vote for questions to ask Sachs. At the beginning and the end of the webinar, participants also submitted their levels of self-reported happiness on a scale from 1 to 10 (similar to the Cantril ladder). It ended with a 0.6 percent increase in overall happiness! To the extent allowed by the virtual space, we can say that we met Sachs and enjoyed the conversation with him.

I was asked to write a narrative comment about Sachs’s seminar, but the reader will forgive me if I will indulge more in comments than in narratives—even if the two go hand in hand. For those who missed the live event, the recording is available on the EoF YouTube Channel.

The topic of the webinar concerned the important and much-discussed question of economics and happiness. The title chosen for the event, “The Pursuit of Happiness… and Beyond,” started from a specific thesis: the utilitarian (libertarian) notion of happiness as (self-reported) utility and its implications (namely the nexus that more wealth means more happiness) has failed to describe the reality of our societies. We asked Sachs what lies ‘beyond’ this failure. His answer was clear: beyond happiness… there is happiness again, as captured by the Greek word eudaimonia.

The Greek philosopher Aristotle taught that a happy life is a life lived according to virtue; virtues are traits of human nature that express one’s excellence. The Greek word for virtue is aretè (ἀρετή), which shares the root with the word aristocracy, the rule of the best.  However, as Sachs reminded us many times, a virtuous life is not something that simply ‘happens’, as the pre-Socratic meaning of eudaimonia and the contemporary word ‘happiness’ (from ‘to happen’) imply. Virtue is a habit, something that needs to be cultivated through constant exercise and practice. Once more, we can find clarity in the vocabulary. The Latin word for habit is habitus, from the Greek word héxis, which means a disposition acquired through constant and intentional action. Virtues do not depend on our individual tastes or desires; they are traits that express the excellence of our nature. This is a perspective very distant from the theory of utility functions (and its hidden idea of happiness as utility) that rules economic theory. Once acquired, virtues help individuals reach the good in their actions, and this path will bring them to a state of eudaimonia. This also implies the importance of caring for other people (e.g., family, friends) and for the common good of society (e.g., politics, economics), which, read through virtue ethics lenses, are two sides of the same coin.

In a nutshell, Sachs told us that beyond utilitarian (libertarian) ethics—what I believe is useful for me—and, implicitly, beyond Kantian ethics—what must I do (as beautiful as the other two Kantian questions, what can I know and what may I hope)—economics today has to deal with virtue ethics, which is to say, how can I become a good person. Sachs touched on many other topics, including moderation, beatitudes, inequalities, and policies. Due to limited space, I will only discuss eudaimonia here. I will explain where, in my view, the weakness and the strength of this approach lie, starting with the former.

In the history of ideas and of Western civilization, utilitarianism replaced virtue ethics, and this happened for a reason. Actually, there were many, but let me express the problem that I believe is very prominent and still unsolved. At the same time, let me clarify that when I say that utilitarianism replaced virtue ethics, I am not saying that the Western world has made progress in this transition. What I claim is that whoever proposes to return to virtue ethics today has to address one crucial problem. This has been well expressed by John Rawls, the most famous political philosopher of 20th century. Proposing his theory of the social contract, Rawls rejected both utilitarianism and virtue ethics as two possible grounds for a democratic society based on freedom and equality. Thus, we cannot accuse Rawls of being partisan for utilitarianism.  As far as his rejection of virtue ethics is concerned, the reason for it is expressed in the first page of Rawls’s book Political Liberalism: “The political culture of a democratic society is always marked by a diversity of opposing and irreconcilable religious, philosophical, and moral doctrines. Some of these are perfectly reasonable, and this diversity among reasonable doctrines political liberalism sees as the inevitable long-run result of the powers of human reason at work within the background of enduring free institutions” (Rawls 1993, 4). Applying Rawls’s words to our context, we should ask if Western societies—not to mention the rest of the world—share a common idea of what expresses the excellence of human nature or a common idea about human nature in general. Aristotle said that eudaimonia is comprised of different ingredients, and sciences such as ethics cannot deal with it with mathematical precision. Fair enough. Still, Aristotle endorsed a precise conception of human nature; he believed that we all are made by ergon, potentialities, that we should cultivate to reach happiness. What if someone disagrees regarding what their ergon is about? Should we exclude dissidents from society?

Remember that to promote virtue ethics among citizens, as Sachs also reminded us, we need a society (education, institutions, politics) built in a way that promotes virtuous practices. It was not by chance that virtue ethics emerged mostly within the strict boundaries of the ancient city-states (poleis). Is it realistic to think that our pluralistic societies can be re-built on the basis of shared virtue ethics? How can we design a policy that balances people supporting virtue ethics and people endorsing other perspectives? In terms of economics, if eudaimonia has to replace happiness as utility, what would we do with people supporting utilitarian or libertarian views? Should we exclude them from the design of our societies and markets?

To me, these are still unresolved problems regarding virtue ethics, but maybe there is someone in the EoF who is able to solve them. Even better, together we can imagine a virtue ethics for the 21st century.

Enough of my perplexities. I will now consider what was, in my view, an incredibly generative idea that emerged from Sachs’s perspective. Roughly at the end of the seminar, when Rizzolli proposed a quote describing the perfect Joy (perfecta Laetitia) of St Francis, the conversation went to the silent yet decisive element of the meeting: gratuitousness. Luigino Bruni expressed an old piece of wisdom from the Bible that said that more important than our happiness is the happiness of our children. Sachs agreed, recalling the topic of sustainability and our duties to future generations. The gratuitousness that leads us to promote the good of the other, the good of the society in which we live, and the good of the environment is inexorably related to our happiness and flourishing. To me, this is exactly the kind of ‘beyond’ that we need in considering the discourse of happiness.

In a formula, I believe we should bring back gratuitousness as the core of the debate in economics where, diametrically opposed to the instrumental logic of market relations, it has found scarce space. We should not be afraid of imagining an economy built on gratuitousness, which is not necessarily self-sacrifice or altruism. Conversely, gratuitousness can involve interacting and vivifying market relations based on mutual advantage. At the same time, we should be able to see and emphasize how much gratuitousness is already at stake in our societies, from the firms to the markets and from the families to civil societies.

Aristotle would have agreed. His most important book is entitled Nicomachean Ethics, the ethics for his son Nicomachus. For Aristotle, ethics coincided with a father giving to his son advice for living a good life. Moreover, in Aristotle’s view, there is this mysterious and beautiful paradox about virtues and eudaimonia: if you seek virtues as a means to reach eudaimonia, you will not reach it; however, if you cultivate virtues as ends in themselves, seeking no other ends through them, you will reach eudaimonia. This attitude in considering virtues as ends rather than means, which resembles the ideas of considering other people in the very same way, is very closely related to gratuitousness. Gratuitousness is the silent protagonist of our reflections and life. Perhaps in its silence lies part of its beauty, but I believe that we, as the Economy of Francesco, should pronounce gratuitousness more often because we can do it in an authentic way, i.e. together.