RETHINKING ECONOMICS STARTING FROM THE COMMONS

Common good is not the sum of individual goods, as well as the knowledge we are producing and sharing via the Economy of Francesco school is not simply the sum of the abstracts of the lessons here reported.

Teachers of the EoF school are, in fact, the outstanding scholars we invited, each bringing a piece of knowledge as expressed in the content of their lessons. At the same time, the teachers we invited are ready to be taught by the students and discussants of the EoF School.

Therefore, we advise the reader to look into these abstracts to find the topics that will be developed during the lessons but also to create her own synthesis among the materials presented. In the end, the school is not really about finding definite answers, but rather starting a common path to answer prophetic questions about economics and economic life:

What would happen if the courses of Economics taught in the Universities focused their attention on the topics of the commons rather than on private goods?

What if the formers become the main object of study and the latter the exception for the economic science?

What if the social business, rather than being considered a ‘hybrid’ form of business, becomes the normal approach, and the ethical and green finance rules over the financial sector?

Is it possible to move away from the primacy of the consumers to the preeminence of ethical consumers who expresses with their daily choices their preferences for an inclusive, sustainable and workers-friendly economic system?

MARCH 3: L. Bruni, P. Santori, V. Rotondi – Introduction and Presentation of the EoF School: ” The economy of the last time“

“What if the economy of sine proprio was that of the era of common goods? Will it be the oikonomia of Francis that will save both us and the earth in the end?”

Abstract: Commons have gradually become scarce and crucial, and they are still too absent from the culture and practice of economics and politics. Common goods made their first appearance in economics in 1911. After a long eclipse they again appeared at the end of the past century in the work of Elinor Ostrom, who was awarded the Nobel Prize for Economics in 2009. Commons are essentially a matter of relationships, because they are relationships between people mediated by goods. Without attention to the relational dimension of life and the economy, and without a relationship that transcends time and generations, commons first cannot be seen, then they cannot be understood, and finally they perish. A capitalist economy must work hard to understand commons because, generally speaking, it does not address problems in a historical or geographical perspective, it sees distinct individuals rather than relationships, and it is defined entirely within the register of male rationality. So the main – if not the only – economic prospect on commons is their destruction, beginning with Hardin’s now classic 1968 text on the “tragedy of the commons”.

For all these reasons, commons are difficult to manage by the capitalist market alone. At the very least it is sad, if not outrageous, to continue to silently and resignedly watch speculators who appropriate water, common land, forests, raw materials, and public land in cities. Their quest for maximum profit from goods that do not belong to them, but to everyone, becomes an additional implicit tax on the citizens, a tax that does not augment the cities’ funds but those of distant shareholders. When will our city governments create an alliance with civil society and businesses to manage the soil, water, greenswards, and streets in a nonprofit and efficient manner? When will States realize that the commodification (much more than privatization) of commons, from highways to public transportation, is a shortsighted course with little social and economic thought? 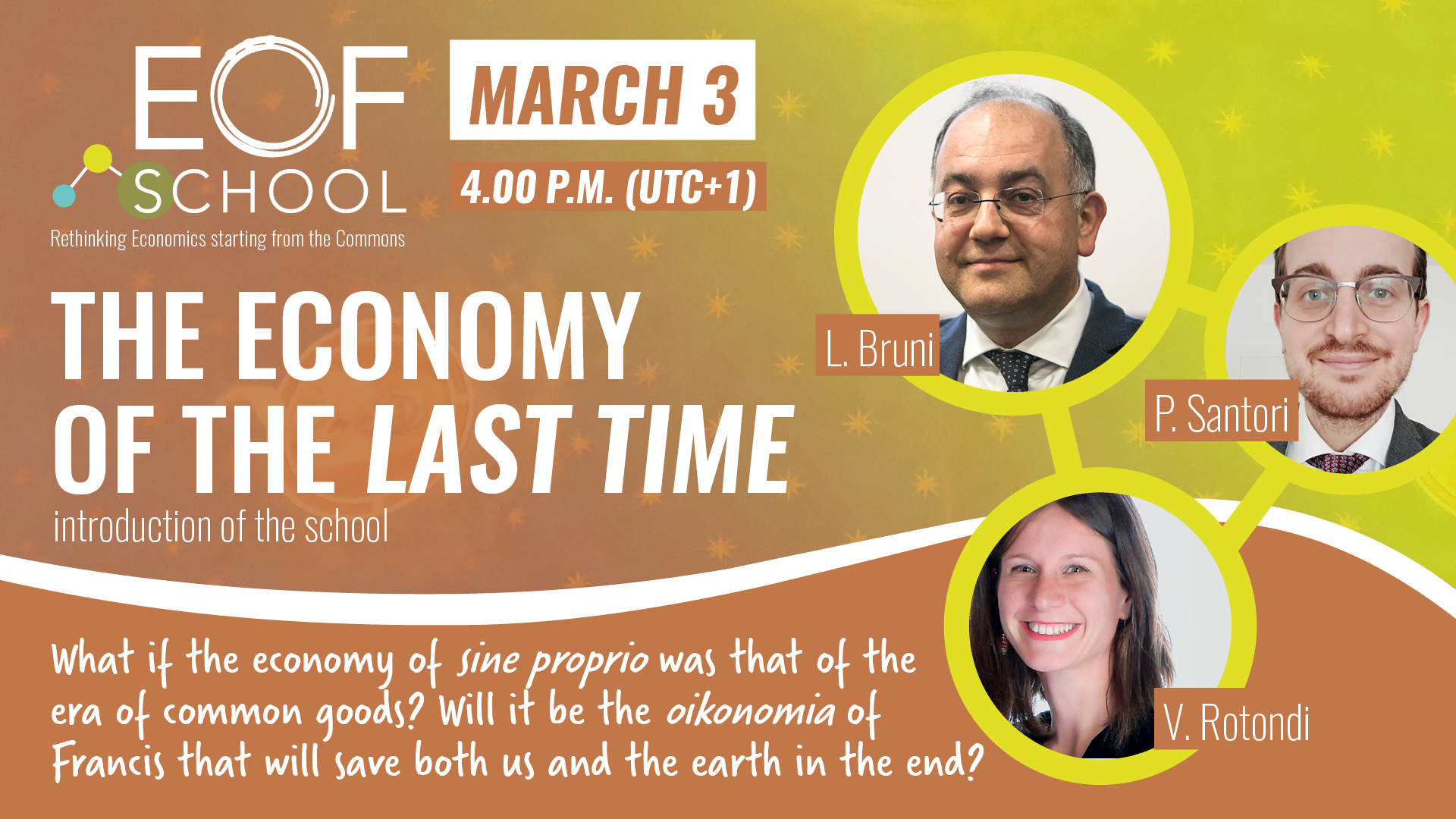 Archbishop P. Pizzaballa is Latin Patriarch in Jerusalem.  He lectured Hebrew at the Studium Biblicum Franciscanum. Consultor in the Commission for relations with Judaism of the Pontifical Council for the Promotion of Unity among Christians.

Abstract: This session outlines the current context of globalization and the challenges related to it. It then develops, in the light of the social doctrine of the Church and the magisterium of the last Popes, and in particular of Pope Francis, some closely related themes:  faith – with particular attention to “integral human development” -, peace, universal fraternity and the  urgency, invoked by Pope Francis, of a new economy based on a new man in whom the Christian recognizes the traits of the New Adam, the Christ. It does so with a special focus on the “warm” context of the Middle East in which the need for interreligious and intercultural dialogue is particularly felt. 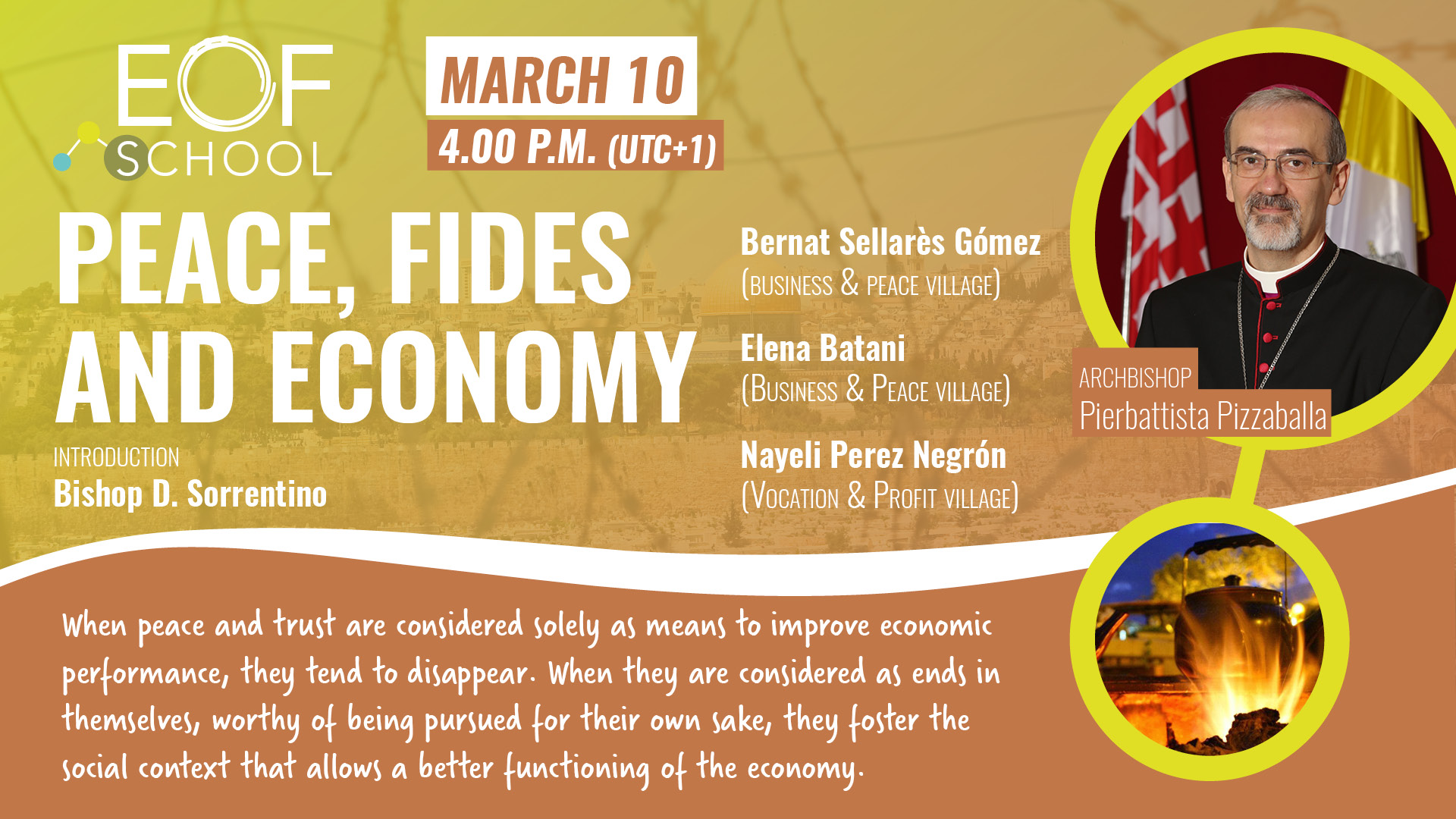 Emeritus Professor of Economics at the University of Massachusetts-Boston and senior research fellow at the Global Development and Environment Institute at Tufts University.

Abstract:  Contemporary capitalist economies are intrinsically based on greed, private property, and competition, right? To save life on the planet from extinction, it seems we may need to shift to a radically different—in fact diametrically opposed—economy of pure altruism, sharing, and cooperation. Yet perhaps the way we’ve been trained to think about economics blinds us to opportunities that are not apparent in these two poles.

This presentation will show how the biased dogmas favored by mainstream economists have distorted our thinking. The neglect of nature, of the care provided to vulnerable humans (mostly, to date, by women), and of the commons in Neoclassical “chalkboard economics” has been deliberate. If we study real-world economies, however, we find that they are complex social, political, and environmentally-embedded systems, and that none could last a day without elements of care and trust. Our first step towards building economies that sustainably provide for the survival and flourishing of life needs to be a re-examination of how we think about “economic actors” and the kind of behavior suitable for the “economic sphere.” 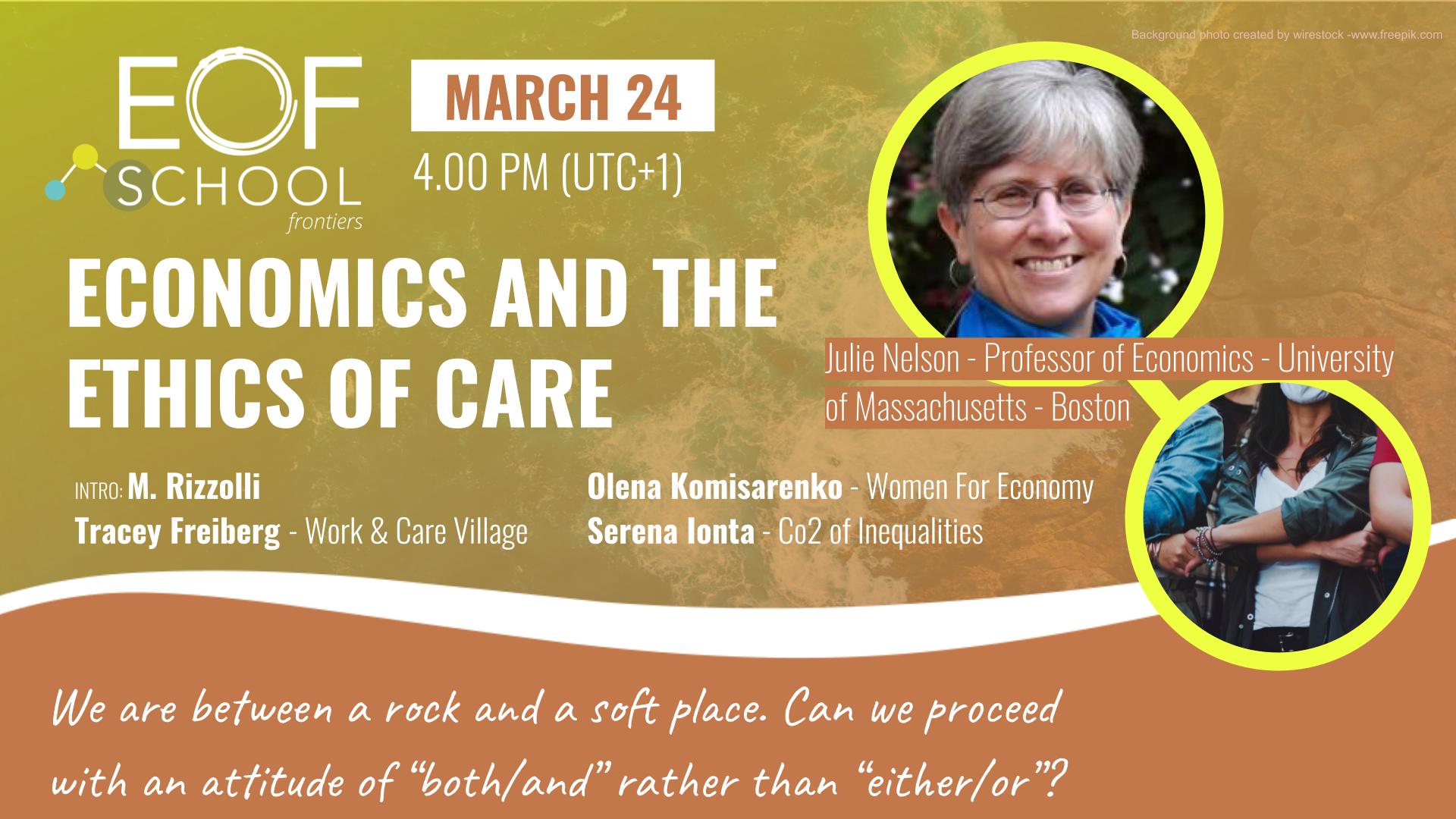 Dr. Sabina Alkire directs the Oxford Poverty and Human Development Initiative (OPHI). She is the Associate Professor of Development Studies in the Oxford Department of International Development at the University of Oxford.

Her research interests include multidimensional poverty measurement and analysis, welfare economics, the capability approach, the measurement of freedoms and human development. From 2015–16, Sabina was Oliver T Carr Professor of International Affairs and Professor of Economics at George Washington University. Previously, she worked at the Global Equity Initiative at Harvard University, the Human Security Commission, and the World Bank’s Poverty and Culture Learning and Research Initiative. She holds a DPhil in Economics from the University of Oxford. 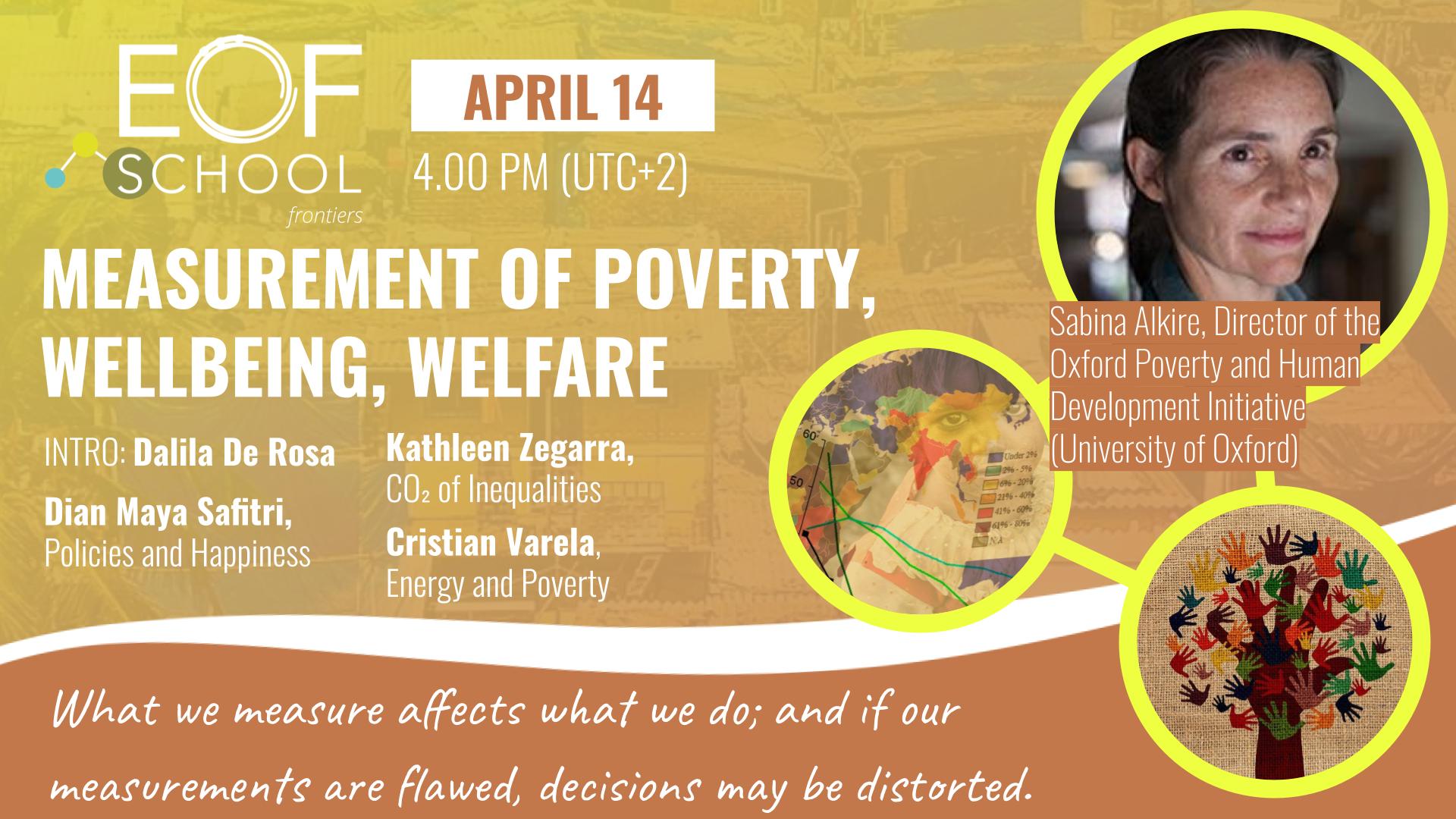 After his studies at the University of Bologna, prof. Giacomo Todeschini was appointed as  Professor of Medieval history at the University of Trieste in 1979. His studies focus on the development of medieval economic theory and languages, Christian doctrine of infamy and exclusion from citizenship and market games, and the political role of Jews inside of the Christian medieval-modern world.

MAY 12> intro: A. Roncella | A. Edmans – Finance as a Common Good. Reconciling purpose and profit

Professor of Finance at London Business School and Academic Director of the Centre for Corporate Governance.

Abstract: Purpose is one of the corporate buzzwords of 2021, with the politicians, the public, and even investors themselves calling on businesses to serve wider society. But it seems unrealistic to think about purpose in a pandemic when companies are strapped for cash, and companies also have a responsibility to their shareholders. Is there a trade-off between purpose and profit, or is it possible for companies to achieve both? This talk will critically examine the case for purposeful business, using rigorous evidence and real-life examples to show what works – and, importantly, what doesn’t. It will discuss practical ways for businesses of all sizes to put purpose into practice, and how investors and citizens can play their part. Professor Alex Edmans will draw on his new book, “Grow the Pie: How Great Companies Deliver Both Purpose and Profit”, which was named to the Financial Times Business Books of the Year for 2020.

Professor of Law and Political Science at the University of Toronto and Professorial Fellow at the Institute for Social Justice.

Her teaching and scholarship have been concentrated on Feminist Theory, Legal Theory, American Constitutional History and Interpretation, and Comparative Constitutionalism

JULY 7> intro: V. Pelligra | R. Sugden – What is the market? A Community of Advantage

Abstract: The publication of The Community of Advantage (2018) was an important event for scholars working in the research avenues opened by Robert Sugden in the last 40 years. At the core of Sugden’s theoretical system are the nature and function of the market and the economy, which are reflected by J. S. Mill’s expression chosen as the title of this book. From this perspective, the market is a dense network of mutually beneficial relationships that are richer the more people differ from one another.
Sugden aims to show that the cornerstone of the market economy is not self-interest, as Adam Smith and almost all modern economists believed, nor the pursuit of the common good, but rather the mutual benefit between the individuals involved in the exchange.
In today’s rhetoric that increasingly relies on sports or militaristic language to present the market as a race or a fight, Sugden reminds us of the ancient idea that the market is the greatest form of cooperation that human beings are capable of and have achieved across the globe.

Following on from the Sociologie des Outils de Gestion research manual (Chiapello, Gilbert, 2013) which presents various possible approaches to the development of a sociology which takes account of management tools and policy instruments, she aims to analyse transformations of capitalism by decoding the management tools used by companies and the political instruments employed by legal entities under public law to regulate and organise this capitalism. More specifically, over the last two years she has been examining the phenomenon of the financialisation of our economy and the tools used for said financialisation. In particular, she is trying to document the penetration of all business sectors by “financialised” tools, i.e. by instruments which rely both conceptually and technically on the technical and scientific corpus of modern finance. She is also looking to understand the extent to which financialised formats are mobilised to incorporate certain critiques of capitalism into its operation. For example, it would appear that the ecology issue is leading to the invention of various financialised devices.

Some topic oh her research: Critiques of capitalism and the history of management; Sociology of management tools and political instruments; Accounting categories and economic categories.

Her intellectual affinities lie at the border between philosophy, game theory and psychology. Primary research focus is on judgment and decision making with special interest in decisions about fairness, trust, and cooperation, and how expectations affect behavior. A second research focus examines the nature and evolution of social norms, how to measure norms and what strategies to adopt to foster social change. This research is more applied, and forms the core of the newly created Penn Social Norms Group (PennSONG). A third, earlier research focus has been the epistemic foundations of game theory and how changes in information affects rational choices and solutions.

For more than a decade, his “Economic View” column appeared monthly in The New York Times. He received his BS in mathematics from Georgia Tech, and then taught math and science for two years as a Peace Corps Volunteer in rural Nepal. He holds an MA in statistics and a PhD in economics, both from the University of California at Berkeley. His papers have appeared in the American Economic Review, Econometrica, Journal of Political Economy, and other leading professional journals.