Skip to content
Listening to plants for a new economic paradigm

Listening to plants for a new economic paradigm

Listening to plants for a new economic paradigm is the title of the second edition of the EoF School, a higher education course promoted by The Economy of Francesco. A new experience of training and reflection for the hundreds of young economists and entrepreneurs of the world who have already registered to follow the lessons online.

“The first edition of the School (Rethinking the economy starting from common goods) – says Paolo Santori, philosopher in Tilburg – has taught us that the future of the economy concerns the commons and if humanity wants to survive, it is necessary to make a decisive turning point towards a new economy, able to safeguard common goods”.

An urgency and thoughtfulness often emphasized by Pope Francis who, addressing the young people of EoF, has warned: You are perhaps the last generation that can save us, I am not exaggerating. [..] I hope you can use your own gifts to fix the mistakes of the past and move us towards a new, more supportive, sustainable and inclusive economy. “Most of the proposals for change today – explains economist Valentina Rotondi – do not seriously question the roots and the basic paradigm of our economic system. Over the past two centuries, economists have chosen the animal paradigm based on the division, specialization of “organs” and on a structure hierarchically managed. While this choice has produced enormous success in speed and efficiency, on the other hand it led to a predatory approach towards natural resources and contributed to the climate crisis. A new paradigm is needed, inspired by the plant model”.

It is no coincidence that the EoF 2021 event hosted an exceptional speaker: the plant neurobiologist Stefano Mancuso – who will be among the teachers of the EoF School 2022. Decentralized and modular organization, innovative responses, refined knowledge of the environment, greater resilience, exceptional sensitivity, capacity for cooperation and mutual reactions are some of the characteristics outlined by Mancuso. “If the economy really wants to evolve towards sustainability, it must become less animal and more vegetable – concludes the economist Luigino Bruni. The 21st century will see large horizontal and vegetable cooperatives, a slow economy linked to the territories. If it doesn’t happen, the green economy will be just a paint that does not change the nature of the economic model. We learn from plants and their intelligence. In order to see them, we have to slow down our wild ride”.

CHECK OUT THE EOF SCHOOL 2022 INFORMATION

What- then- could economic science become if economists had adopted the plant paradigm instead of the animal one two centuries ago? And what would managerial theory have become if the scholars of organizations had chosen the metaphor of plants and not the military or the sports one? And again, is it possible to rethink property rights and the distribution of wealth in the new plant capitalism? These are some of the questions and challenges that will animate the EoF School. An innovative choice. By the way: innovation is the word of botany, used for buds and new branches. Innovations need roots, good soil and a living plant. The EoF School will try to do its part by promoting a transdisciplinary dialogue between authoritative scholars and young economists to contribute to a broad reflection.

So, let’s save the date and see you on December the 18th at 4 pm on the international Youtube channel EoF for the first lesson held by Prof. Luigino Bruni. 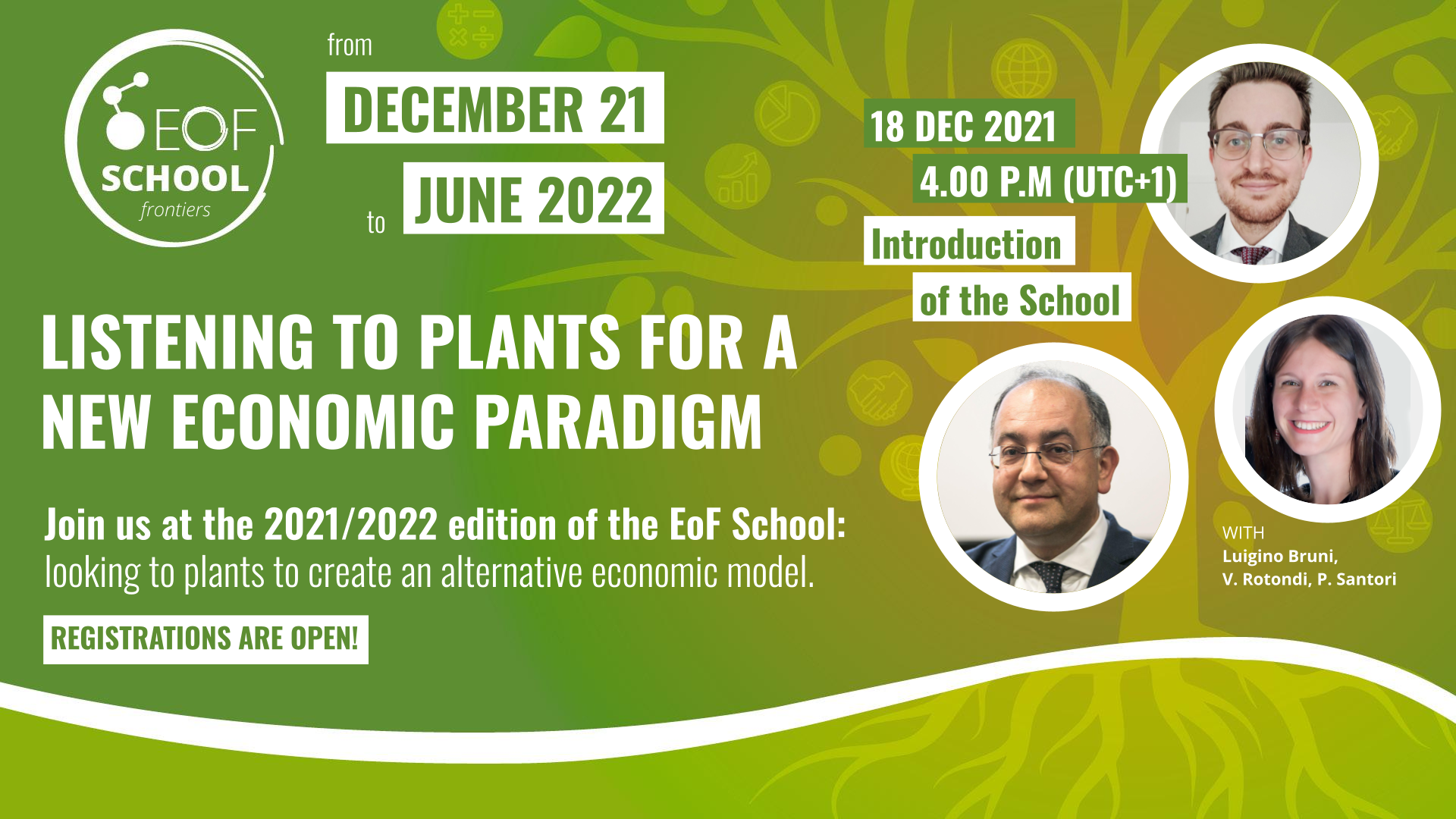