THE ECONOMY OF FRANCESCO. YOUTH ARE READY TO SIGN ‘THE PACT’ WITH POPE FRANCIS 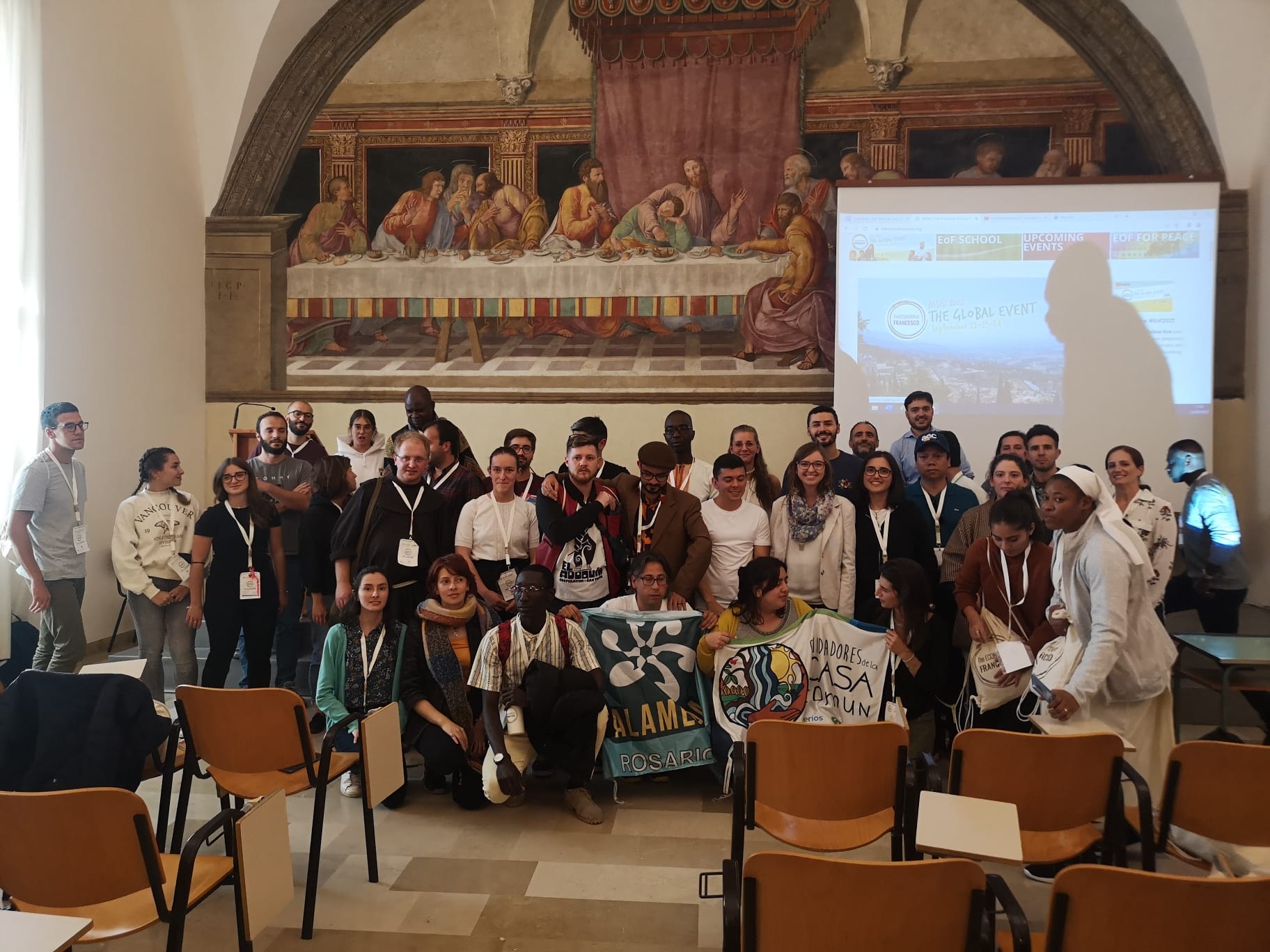 THE ECONOMY OF FRANCESCO.
YOUTH  ARE READY TO SIGN ‘THE PACT’ WITH POPE FRANCIS

Pope Francis will arrive in Assisi tomorrow, Saturday, September 24, 2022. It is the day that thousands of young entrepreneurs and changemakers are celebrating their common work to change the economy with a firm pact with the Pope, that on one hand shows the end of a long road, three years in the making, meant to prepare the beginning of a process of concrete change that began with grassroots efforts.

PROGRAM OF PAPAL VISIT TO ASSISI

At 9 a.m. the Pope leave the Vatican helipad and land Assisi one half hour later in an area near Pala Eventi located in Santa Maria degli Angeli.

Pope Francis will arrive at the Lyrick Theatre where he will be welcomed by the Bishop of Assisi, Nocera Umbra, Gualdo Tadino and Foligno, and the leaders of the organizing committee and by five young people from five different parts of the world:  Argentina, Sri Lanka, Norway, Mozambique and New Zealand. They represent the community of EOF;  Cardinal Michael Czerny, Prefect of the Dicastery for the Service of Integral Human Development; Sister Alessandra Smerilli, Secretary of the Dicastery, Donatella Tesei, President of the Umbria Region,the Prefect of Perugia, Armando Gradone, Stefania Proietti, Mayor of Assisi and President of the Province of Perugia, and representatives of the Franciscan families. In addition, members of the event’s organizing committee: Luigino Bruni, Francesca di Maolo; the President of Pro Civitate Christiana, Don Tonio Dell’Olio; and the President of the Foundation Sanctuary of the Dispossession, Don Cesare Provenzi.  At 10 a.m. the Holy Father will take the stage to meet with the young changemakers, including an artistic-theatrical moment based on the verse “Sentinel What Remains of the Night” (Is 21:11),

There will also be a welcome and summary of experiences by eight people participating in the conference: an Italian PhD student in Economics, an Argentinean, an African, a young Thai teenager, a Maasai economist from Kenya, a young Afghan woman who is an activist for women’s rights in her country, a farmer and co-founder of Francis’ Farms, and a young inmate who is a Physics student who will speak about the value of work in his life within the penal institution. The Holy Father will speak at 11:30 a.m., and at the end of the meeting, the Pope will sign the pact with the youth, including the 12 commitments drawn up at the end of Friday’s work day in the villages. The Holy Father will depart from St. Mary of the Angels at 12.00

THE VASE OF THE SERAPHIC INSTITUTE

Under the stage of the Lyrick Theater will be a vase decorated by the boys of the Seraphic Institute of Assisi. The young people’s pledges will be placed in the vase in front of Pope Francis. It is inspired by the one used during the wedding at Cana where water was transformed into wine by Jesus Christ, marking the first miracle, and with it the start of a path of profound change for all humanity.

The large vase will be deposited in the garden of the Portiuncula, in remembrance of the place from where the first friars set out on mission following in the footsteps of Saint Francis. The hope for the participants is that the ideas and proposals of the young people of EOF can initiate genuine change for our society and its economy, introducing a new vision where growth not only focused on profits, but also on the universale improvement of lives.

The children painted the vase white, then colored it, and imprinted their hands on it. In this way, its ordinary appearance was transformed into something unique and precious. The boys became true artists, conveying a message from the heart  for a new vision of society in which even the voice of the most  humble becomes a source for the growth of all.

Friday, September 23rd, 2022 a day to visit Franciscan places. Young people colored the Seraphic city with their enthusiasm and cheerfulness during “Face to Face with Francesco”, following in the footsteps of St. Francis and during the conferences in the villages, set up inside Santa Maria degli Angeli and the historic center of Assisi.

Moments of encounter and dialogue at the Protomonastery of St. Clare (Economy is Woman), at Monte Frumentario (Agriculture and Justice and Finance and Humanity), Papal Basilica and Sacred Convent of St. Francis (Life and Lifestyles and Work and Care), at the Shrine of the Dispossession (Vocation and Profit), at the Basilica of St. Mary of the Angels (Management and Gift), at the Bishop’s Archive of St. Rufino (Policies for Happiness), at Pro Civitate Christiana (Business and Peace), at the Municipal Palace (Energy and Poverty), at the Seraphic Institute of Assisi (CO2 of Inequality) and at the Pastoral Center of St. Mary of the Angels (Enterprises in Transition).

The young entrepreneurs also met with international speakers on the main themes of the event. At the Pro Civitate Christiana, economist Gael Giraud  spoke on “The Economy of Francis: A New Economy Built By Young People,” at the Sacro Convento Francesco Sylos Labini on “Meritocracy, Evaluation, Excellence: the Case of Universities and Research,” at Monte Frumentario Vandana Shiva spoke on “Economy of Care, Economy of Giving. Reflections on St. Francis: ‘It Is Only By Giving That We Receive,'” in the Sala della Conciliazione Vilson Groh addressed “Paths for a New Educational and Economic Pact: Building Bridges Between Center and Periphery.”

At the Seraphic Institute, Sister Helen Alford spoke on “Universal Botherhood: An Idea That Could Change The World”. In the Basilica of Saint Mary of the Angels, economist Stefano Zamagni spoke on “The Dangers Already Evident Of Over Concentration On Business. What Is The Contrasting Strategy?”. On the evening of September 23rd 2022 there were guided visits at Saint Francis Basilica and at the Basilica of Santa Maria Degli Angeli.

All materials produced (texts, photos and videos) will be available at the link: https://bit.ly/3qQGQPQ.