Two special events for the EoF School in July! Don’t miss them! 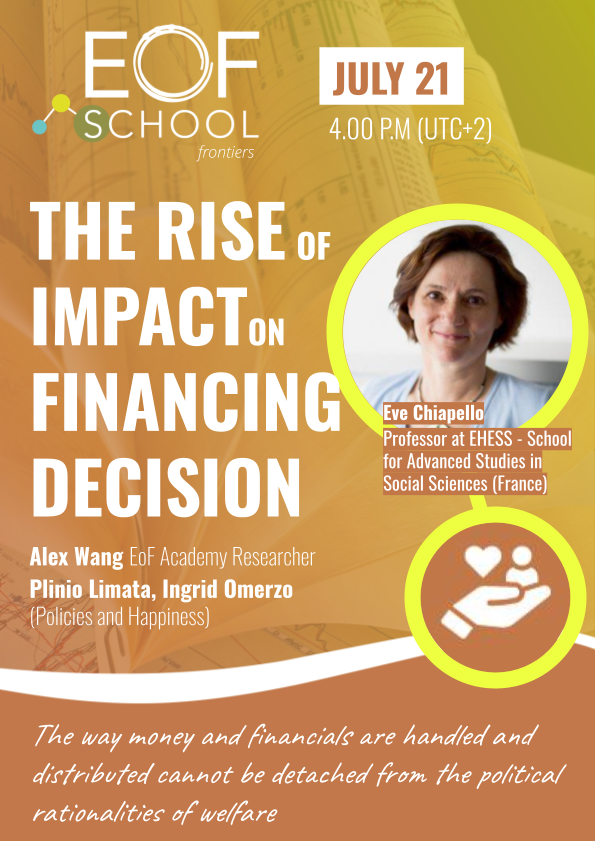 On July 7 we met Robert Sugden, Professor of Economics, University of East Anglia.

To watch again the lesson: https://youtu.be/kPRmelcem_Y

One can look at the market as the realm of egoism, where each agent aims to maximize her own interest. Consequently, one can aim for a place free from market logic, a social space ruled by altruism and intrinsic motivations. Robert ‘Bob’ Sugden disagrees whit this dichotomous vision. In his view, the market is a cooperative venture for mutual advantage, where each person promotes her interest alongside other people’s interests. This is the telos of the market, to be a community of advantage. In July, the EoF school wants to put Sugden’s lenses to see the market with different eyes.

July 21, we will have the lecture by Eve Chiapello, Directrice d’Etudes EHESS.

According to Eve Chiapello, capitalism evolves by incorporating into its structures the criticisms it receives from various fronts. Thus the ‘social’ criticisms (from socialists, workers, environmentalists…) and the ‘aesthetic’ ones (from intellectuals and artists), which represented the main reaction to capitalism in the second half of the twentieth century, rather than causing the collapse of capitalism, have become its cornerstones, giving life to the new capitalism of today, in which the major players are businesses born of young people with cultures and mentalities very different from those of the capitalists of the past century. Today, in large companies, we are increasingly witnessing the development of social and environmental budgets, of ‘social business’, attention to workplace well-being, up to the recent concepts of ‘symbolic’ or even ‘spiritual’ company capital. Parallel to the inclusion and transformation of social criticism, this capitalism has also internalized ‘aesthetic’ criticism, giving rise to a new creative era. Capitalism, chameleon-like, transforms itself, feeding on everything it finds in its path, like all empires that conquer enemy peoples and incorporate their culture, art, and religion. Even today, we see it, with capitalism absorbing a new series of criticisms, the ‘ecological’ ones. EoF school meets professor Chiapello to discuss these important sociological topics, to understand if the social business is transforming capitalism or vice versa.