Responsible Consumption and Economic Democracy… What are we talking about?

What are we talking about?

What is the market demand if not the sum of different people (customers), making their own purchasing choices?

And what would happen if the customers began to consider, demand and pretend ethical aspects in the way in which a product is produced?

Think about it: treatment of workers and labour conditions, fiscal behaviour and transparency, environmental attentions and consciousness, and so on… what if these criteria enter to be new standard decision variables in the buying process of a big part of people, at the same level of quality and price of the product?

It can change corporate behaviours! 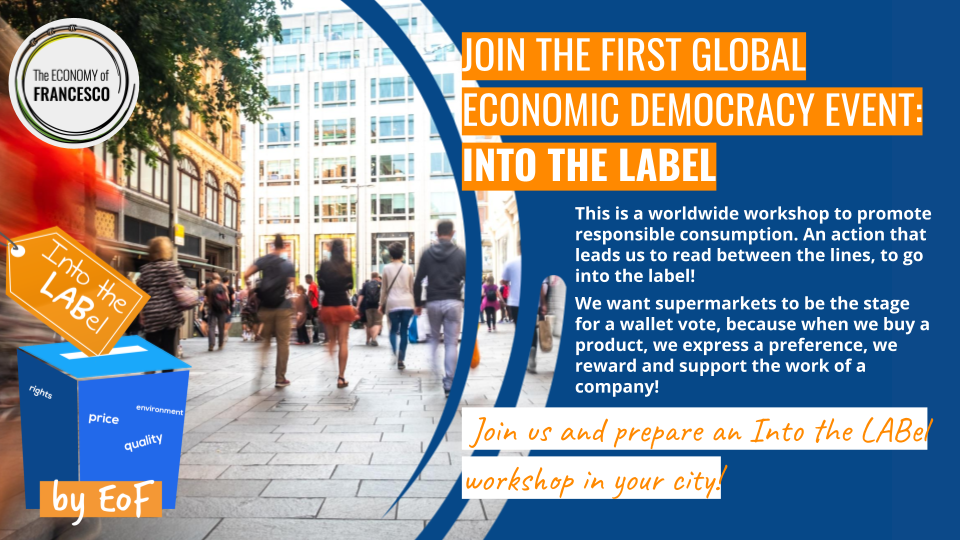 So what’s the idea?

To help our people to think, consider and operate the power that they have when they go to buy a product. The power to express a vote with their wallet, choosing (when possible and affordable, for sure) an ethical product, that is like to say to the company: “I appreciate your way of doing, your efforts on environment/society/workers/etc., because I value these topics and… I CARE about it”. If we manage to do it, let them know and do it together, we will exercise the power of demand, because we are the market demand.

In Italy, since the 2012 was launched a new series of events in front of supermarkets, in line with what was a trend back in the days: a flashmob, but of ethical buys, so a CASH-MOB. During the event, the staff involve and explain to customers how to partecipate, simply choosing the products they want/need to buy, but choosing like they were supposed to choose a candidate at the election-day: before the shopping, the staff give the customers some documented infos on ethical aspects about different popular brands/companies they previously have collected. In some cases the staff personificate the brands doing a self-presentation of the company/brand, as they would doing a candidate speech/confrontation between them and a “responsible consumer”. The electoral programs are given by what a company/brand says of itselfs and what the documented infos contains. Every customer is supposed to choose product based on what he/she values most and what he/she can afford/wants to pay. After the purchase, usually the staff request to take an anonymous survey to collect the main motivations/variables that guided the customer choice, in order to create an aggregate restitution of the experiment.

See the tutorial video on how to prepare the cash-mob in this way here: https://www.youtube.com/watch?v=C_cOdfplttM&t=3s

That’s how Italy did it, but that’s only a possible way. You can certainly think about other ways to do it, adapt to your territory and context. What could be the best way to involve, inform and raise awareness of this in your community?

Let us know what you think and if you would like to create an event such as the cash-mob in your territory in the week before the 2nd of October!

We are looking for EoF groups that create responsible consumption and economic democracy events, in order to have an impact and share the experience with the world during the EoF global event on the 2nd of October!

If you are interested in participating/ creating a local event on this/ know more on Italian previous experience, write us: [email protected]